A mortgage loan is the largest debt most folks will take out in their lifetime. It's a major financial decision. The big question when it comes to mortgage lending is should you take out a 30 year fixed rate loan? Or should you take out a shorter term and pay the loan off faster? Today we're going to break down the numbers to help you make an informed choice, and I'll also give you an alternative that can help put you on the path to a better retirement. Read on.

As a general rule a 30 year fixed rate is going to come with a higher interest rate than a 15 year. That should be expected, after all you are borrowing the bank's money for twice as long. How much difference there is in the rate between a 15 year and a 30 year is something altogether different and is determined by a number of factors, but I'll give you two examples. When I recorded the video above at the end of 2021 a 30 year fixed rate was around 3.2% and a 15 year was at 2.6%. So you had a "spread" of .60% per year in interest by taking out the shorter loan. As I type this in October of 2022 rates have gone up substantially and the national average for a 30 year fixed rate is now at 7.14% while a 15 year is at 6.37. While you would no doubt rather have the mortgages of late 2021, the point remains that there is still a spread between the two terms. Right now that spread is .77%. Since those are the current rates we'll use those numbers here to dive deeper on which option may be right for you. 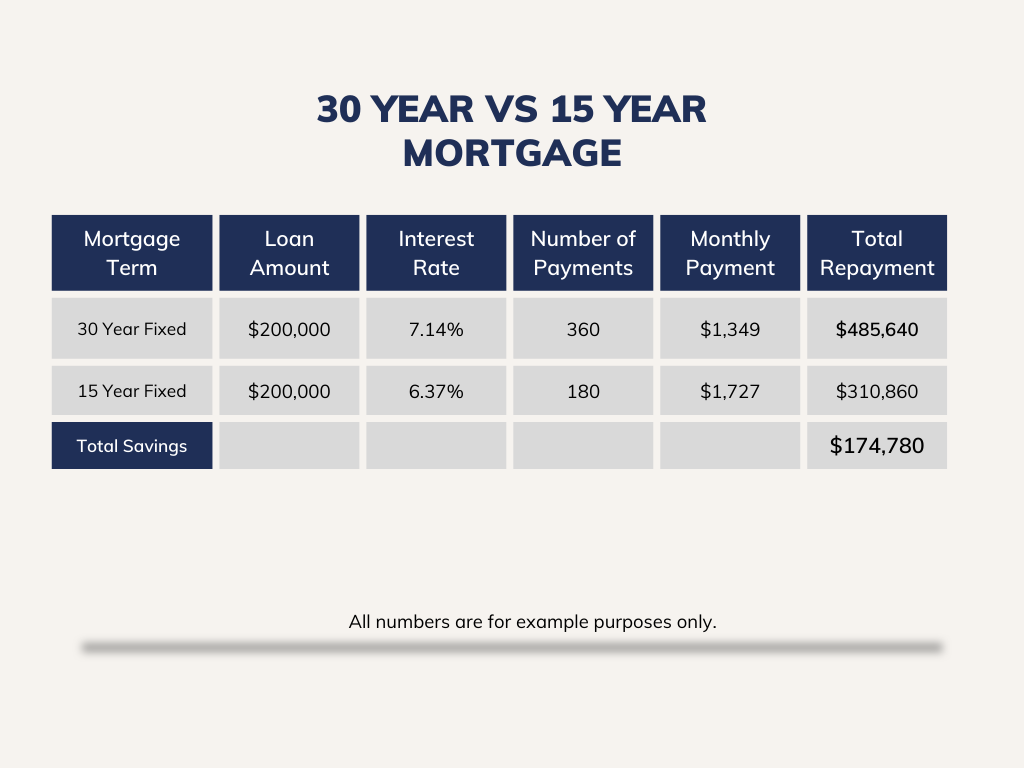 I'll let you in on a little secret - the math always works out in favor of the 15 year. Simply pay borrowing the money for half the time and making half the number of payments the total repayment is going to be lower on the 15 year. Another tip is that if you already have a loan and it doesn't make sense to refinance because rates have gone up you can always make extra payments on the 30 year you have and pay it off sooner saving yourself a bunch of interest. I just gave myself another idea for a blog post. But I digress.

So I told you I'd give you an alternative to simply looking at it as a 15 vs 30 year discussion. Here we go. What would happen if you took out the 15 year mortgage and paid it off on time, but then decided to continue making a "mortgage payment" to yourself in an investment account? Spoiler alert: If you did that for the next 15 years at the end of the 30 year timeframe you'd have a paid off house AND a big ole pile of money in your investment account. I'll prove it to you. If you took out the 15 year above but once it was paid off you started saving the $1,727 per month into an investment account and you earned 7% on that money on average for another 15 years what would you have? You would have an extra $547,393!! I don't know anyone who wouldn't like that!

So there you have it!

I know that it might sound like a lot of money to put away per month, but think about it. The 15 year payment was an extra $378 per month over the 30 year. If you could find a way to make that payment you saved yourself almost $175,000 in mortgage interest. If you could make that payment for the first 15 years you'd certainly be used to budgeting for it, so let's keep the party rolling. Pay yourself for the final 15 years and invest for your future. Obviously all of the numbers in this post are examples, but the concepts remain true. Borrow money for a shorter term and you'll save yourself a bunch of interest. Invest money for your future and you'll be well rewarded. It's probably something you already knew, but sometimes putting numbers to the concept really illustrates the benefit. I hope you enjoyed a look under the hood of the math of mortgages. Until next time!