Why Time in the Market Matters

In Investing, Time is Your Most Important Asset

What's the one thing you can't make more of? Time. Ask anybody. Time is the most important thing that we have, our most valuable asset. No plan is that is more true than in investing. You can't substitute adding more money later on for time. You can't make up for it with great investment gains. Because of the value of compounding, the gains you can earn over a large period of time are very difficult to duplicate over a shorter term, even with more money.

I know what you're saying to yourself right now - "I've got plenty of time, I can make up for it by adding a little extra money". While you can certainly make up for lost time with ENOUGH money, it takes quite a bit. I'll prove it to you. Let's tell a story about Steve and Jimmy.

Steve has always been a good saver, from the time he was kid. When he was 12 he used to save up his paper route money, that's just him. His best friend Jimmy on the other hand was a spender. He had a paper route on the next street over, but as soon as he got paid he was at the corner store spending all of his earnings. Now let's fast forward 10 years, both Steve and Jimmy start working at the same company. Steve is still a saver, so he starts investing in the company 401(k) as soon as he can. Let's say that he is 22 years old. Steve starts putting away $250 a month into the plan. Jimmy thinks Steve is a fool. He thinks that saving $250 a month "for when he's old" is hurting him today, and he wants to have fun, so when he meets with Human Resources he opts out of the 401(k).

Now let's fast forward 10 more years. Jimmy and Steve are both 32 years old. Steve has been saving into the 401(k) for 10 years. Both are starting families and Jimmy finally starts to look toward the future. He decides that saving for the future is important and he decides that he's going to start saving big. He talks to Steve and finds out Steve has been putting $250 a month into the 401(k) for 10 years already. "No problem" says Jimmy. "I'm going to put in $500 a month! By the time I retire I'll be rich!" So Jimmy sets off at the age of 32 to put away $500 a month into the 401(k).

Now here is where it gets interesting. Let's wind the clock forward one more time, to their retirement party. Jimmy and Steve are both 65 years old. Let's pretend that they both earned an average annual rate of 8.5% on their money. The primary differences in their saving was that Steve started 10 years sooner, but put in half as much money per month. Jimmy didn't start saving early on, and tried to make up for it by doubling up the amount he is invested. Here's how it looks on the day they both retire: 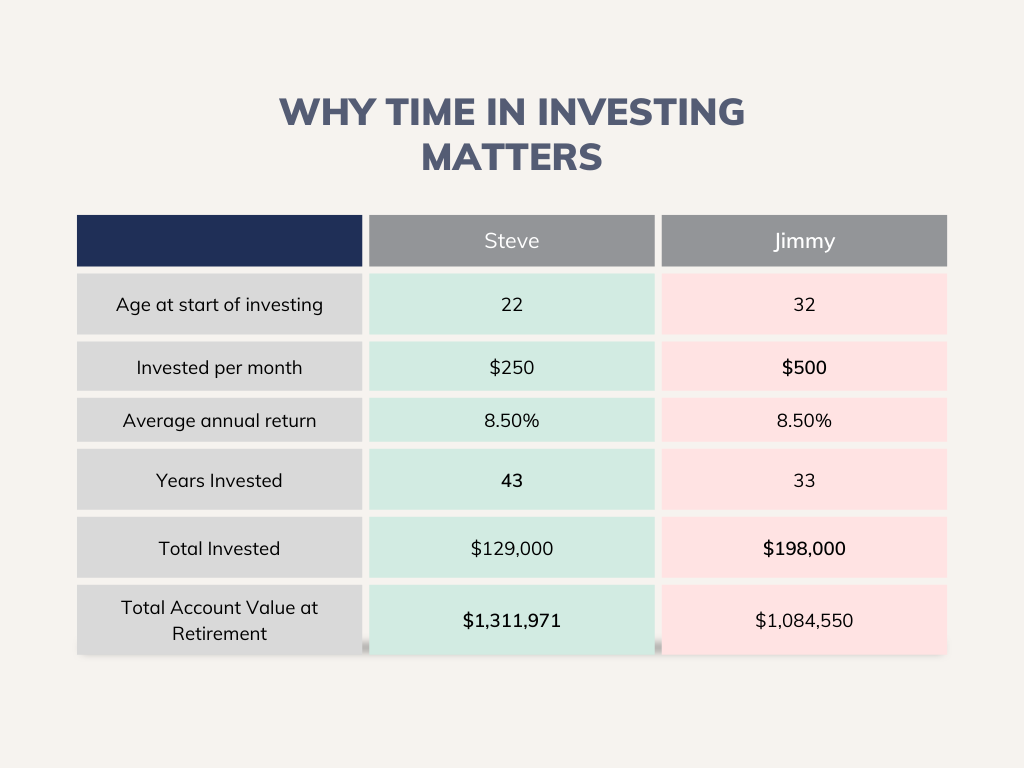 If you've read this far it shouldn't be a surprise to you that the guy that started first won the race. I mean, I named the blog post "Why Time in the Market Matters". That should have been your first clue. That being said, there it is. There's the math. Even doubling up on contributions, and being invested for quite a long time, Jimmy never made up the ground on Steve. To be fair, in our example the 65 year old Jimmy still has a retirement nest egg of over $1 million, but it still illustrates the point that you can't make up for lost time.

As the old saying goes, the best time to plant a tree was 20 years ago. The second best time to plant a tree is today. The best time to start investing was quite some time ago. That being said, it's still better to start now than to not invest. The more important lesson here is that if you have kids, or grandkids, teach them the value of saving and investing early. Help them get started on saving, even if it's a small amount. Plant the tree today so that it has lots of time to grow!